The Qur'an is a unique book, full of inspiration, wisdom, Guidance, and answers to practical questions. 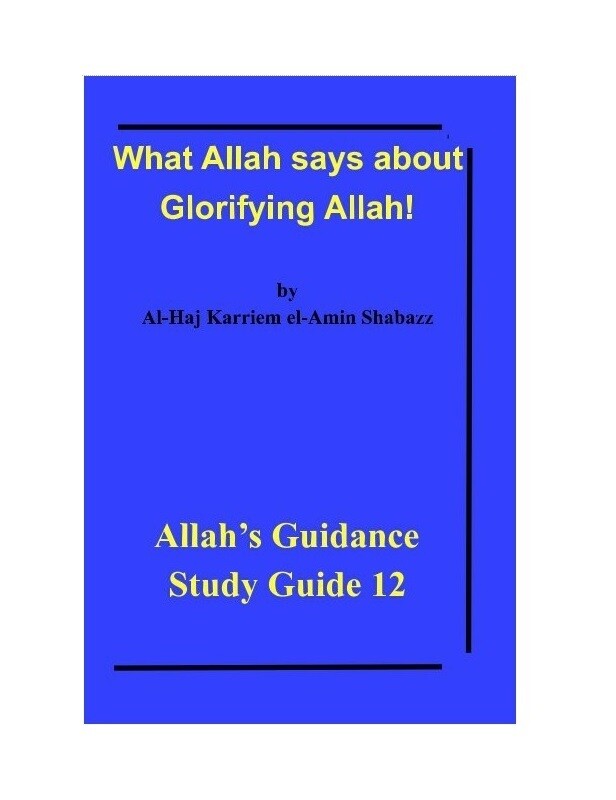 "To glorify Allah" means to proclaim Allah's being free from, and exalted above, the defects, faults and weaknesses, which the idol worshippers ascribe to Him due to their idolatry and denial of the Hereafter. The best form of expressing this is the Prayer. That is why many commentators say that "to glorify" means to offer the Prayer, as it has been commanded to be offered. This is the formula for eradicating evil from the world: “Do good deeds and defeat evil with them.” The best way of making you clean living is to establish Prayer, which will remind you of Allah over and over again. Which will produce those good characteristics in you, that help you successfully fight against the systematic, and united front of evil, that has been formed against the mission of the truth. This will enable you to establish the system of virtue and reform. There is great wisdom in this system of the timings of Prayer. One of these is to avoid the timings of the worship of the sun worshipers. In every age the sun has been one of the greatest deities of the idolaters, who worshipped it at the time of sunrise and sunset. Therefore, these two times have totally been forbidden for Prayer. Besides this, they worshipped the sun at the time of its zenith. That is why Islam has ordained that the Muslims should offer their two prayers during the day time after the sun has declined, and the Fajr prayer before the sun rises. The Prophet (saws) himself has mentioned this wisdom of the timings of prayer in several traditions.

Save this product for later

Inner City Voice for Dawah has developed a series of books highlighting the wisdom of Allah in the Qur’an. This book series is Allah’s Guidance to address many of the social evils the world is experiencing today. The language of the Qur’an is Arabic while the wisdom and Guidance is universal. Allah has sent down the solution to every human problem suffered by people in countries around the world. We believe that by not learning and implementing what Allah says in relation to today's problems and social evils, such as bullying, using intoxicants, racism, etc., that these problems will, at best destroy our peace and happiness. To support our work DONATE at: paypal.me/khuhamibi

Click this link to read our study guides for FREE:

Quality is top-notch. Shipping is fast. Customer service is AMAZING. I honestly can't recommend them enough.

There are many classes throughout Americas masajid, and across the internet, to teach how to read the Quran in Arabic with Tajweed (correct pronunciation). Although there are many blessings to be gained by reading Allah’s wisdom and guidance in Arabic, by not understanding it, Americans are missing out on how to utilize Allah’s wisdom and guidance in their everyday lives. The guidance and wisdom in the Qur'an is so vital that no segment of the world can be successful without it.

Allah has told us that it is not His purpose that all human beings should be forced to accept His Guidance. Had it been so, Allah would have created them in such a way that they would have been righteous by birth, like the angels. Then there would have been no need for His sending Prophets and Books for the gradual establishment of the Way of Allah. Allah does not desire this.

On the contrary, Allah intends that the Truth should be presented to the people in a rational way. So, that those, who are convinced of it, may adopt it without any coercion, and then mold their characters in accordance with it. In this way, they would attract the best among the people towards it, until they succeed in establishing the Straight Way.

It is a law of nature that, when a man is not prepared to rise above prejudice, in his quest for the Truth, his heart closes to every truth, which is opposed to his desires. We can describe this condition by saying, that the heart of that person has become sealed, and Allah describes it by saying, that He has sealed the heart of the person.

The guidance and wisdom in the Qur'an is so vital that no segment of the world can be truly successful without it. Allah has described the Qur'an in these words: “ ...this book is a perfect guidance for mankind and consists of clear teachings which show the right way and are a scale of Truth and falsehood.”

Allah is the Creator of man, therefore, it stands to reason that it is Allah’s responsibility to provide the right guidance to His creation, and show it the way to fulfill the objective of its creation. Allah's Guidance is not only Man's greatest need, for success, but it is required by Allah’s mercifulness. Who else would provide guidance to the creation if not the Creator? And if the Creator does not provide the right guidance, who else could?